Guess what?! This is a reasonably timely post! Woohoo!

Christmas was fantastic this year. We went to the 4:00 service at St. Julian’s on Christmas Eve. The kids both opted not to be in the pageant, but we enjoyed watching the other children. It was the perfect service for our squirmy kiddos. There were plenty of other wiggly, not-quite-silent children there, so ours were perfectly comfortable and I spent very little time worrying about their activity level. Isaac even held a lit candle through an entire song and didn’t catch anything on fire! 🙂

We had chili from the slow cooker that night, so it was a nice relaxing meal time. We watched Elf to unwind before bed. 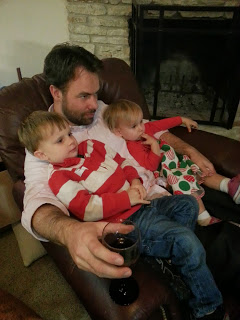 Kids went to bed at semi-reasonable hours and then Todd and I finished our Santa prepping. I think we did pretty well – we were in bed by 11:30, which was better than I expected. Isaac may still have been singing in his room at that point…

He ended up sleeping late because he’d been too excited to fall asleep the night before. Laine awoke at 8:30 and Isaac woke about 10 minutes later. That worked out just FINE for Mom and Dad!

Isaac was the first to unwrap a gift, of course:

Laine got a helmet because she keeps trying to ride Isaac’s bike and she generally moves too quickly for our comfort. 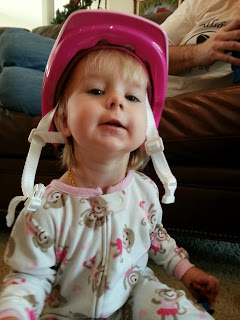 Isaac got some new Lincoln Logs to supplement the set he got from Aunt Kristin and Uncle Dave last year. We have spent the majority of 12/26 building with the two sets combined. 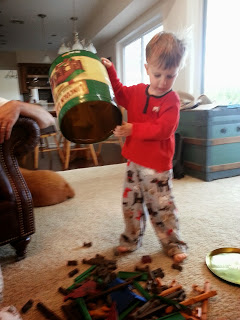 Laine had to take a brief respite to carry on with all of the unwrapping.

The kids got Todd a coffee mug for work. It has pictures of the 2 of them on it. Isaac helped him open it.

Jackson got an enormous chew bone, but was moving too fast for me to get a good shot of him with it. 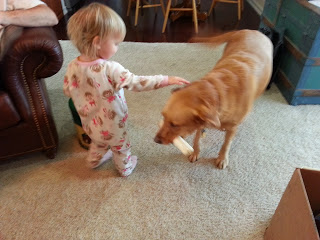 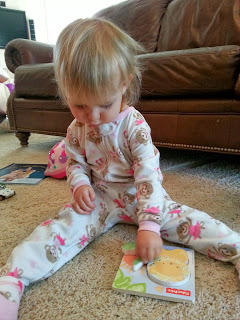 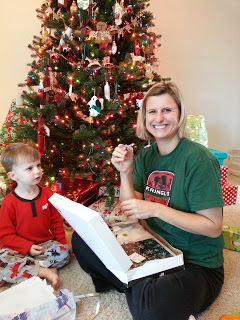 One of the favorite gifts of the day was the tent from Todd’s sister, Shannon, and her family. Isaac even slept in it in his room last night. This thing is going to get a LOT of use.

It was fun to watch Laine carefully pull tiny pieces of wrapping off of boxes while Isaac yanked them open as fast as possible. It’s hard to know how much is difference in dexterity versus temperament.

I have learned that I apparently have an addiction to BBC programming. Some of my favorite gifts were a Tardis mug from my sister, Doctor Who and Sherlock shirts, and a Harry Potter/Doctor Who necklace. Todd also got me the full set of Harry Potter Blu-Ray discs. (He also got me tickets to see Wicked in Austin next March, but that’s not related to the BBC. I got him the box-set of West Wing on DVD – also not from the BBC.)

The kids were excited about gifts from Aunt Kristin and Uncle Dave. 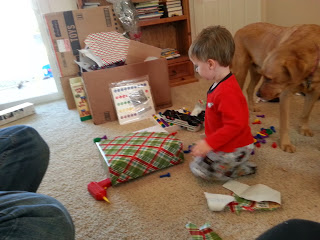 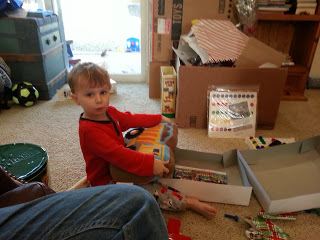 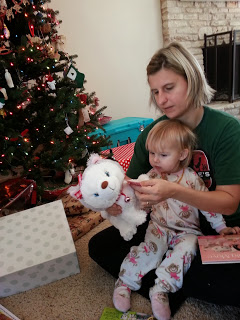 Isaac got a new soccer goal and ball set, which I think he’ll enjoy.
Laine got “Rody” who is a bouncing horse. This thing is hilarious!
The dress-up box from Grandma and Grandpa was a success. Laine tried on virtually every hat at least once. Todd and I also had fun with the different hats. 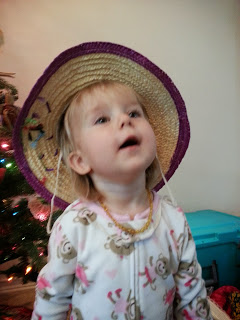 Nana got Laine a little purse to carry around. She also received a picnic basket. She loves to carry things around in the crook of her elbow. This is how I expect her to look for a few weeks now: 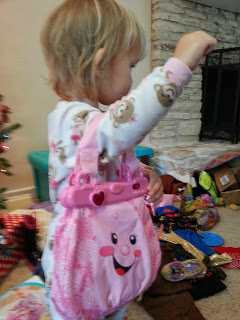 The phone was also tremendously exciting. I guess it’s in the genes…

Nana also got Isaac this nifty drill set. He has had  a BLAST putting all of the screws/bolts into the tray and taking them out again. He usually uses the drill, but also experimented with the wrench. He doesn’t have much patience for the screwdriver. 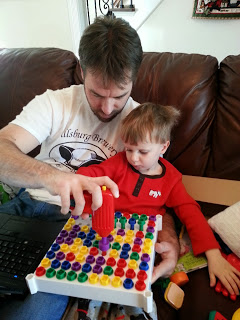 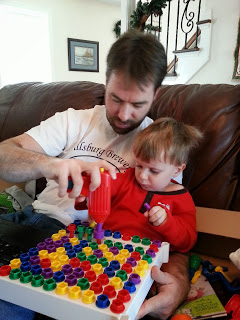 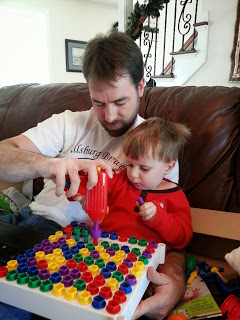 Elke, Christian, and Milena came over for supper, as has become our annual tradition. I made my first Christmas goose and will definitely do it again. Meanwhile, Christian entertained all of the kids…

Today, Rody continues to be well-used. I laugh every time Laine gets on this thing. She doesn’t have any interest in holding on so that she doesn’t fall off…
Not to be outdone:
December 12, 2013 ~ Heather Walter ~ Leave a comment

Listen until the very end to hear Laine say “Isaac.” It melts my heart…

Her words now include:
Banana
Bounce
Bulldozer
Dad
Dance
Down
Help
Isaac
Mom
No
Nurse
Out
Poop
Shoe
Side (to indicate outside)
Sit
Straw
Thank you
Up
Water

I am sure there are more that we’re forgetting (or don’t recognize), but that’s quite a start!

I took these videos a couple of weeks ago while Todd was in Switzerland, but then forgot to post them to the blog. Oops. Sorry the rain is so loud on the umbrella in the first 2 videos. It blocks out a lot of Isaac’s chattering, so you can’t tell what he’s saying. It wasn’t actually raining when we left the house about 3 minutes before I started recording.

After he finally left the puddle, I actually poured about 1/2 cup of water out of each of his boots.

June 4, 2013 ~ Heather Walter ~ Leave a comment
My giggly “ghost”:
Enjoying the rainy day at home. Before things got outrageously out of hand… LOL! We started off at home, then ended up splashing ALL OVER the park next door, which I did not video because a) I didn’t want to take my actual eyes off of Isaac or Laine and b) because I didn’t want my phone to get ruined in the rain and c) because I wanted to enjoy the moment.
Isaac has started hiding in the linen closet between bath time and bed time. Laine enjoys searching for him.
Tonight’s delay-going-to-bed antics:
First she wanted to play with Isaac, then she wanted to play with Jackson. She was tickled to pieces that she could take J’s bone, go around the rocking chair, and then give it back to him. Seriously, this is why all dogs go to heaven.
May 22, 2013 ~ Heather Walter ~ Leave a comment

OK, so I can’t seem to post my videos. I am going to try an experiment to see whether this works. Please bear with me…

Mom, you should see that some things are underlined. These are links you can click on to take you to the videos on an outside site. I tried to make the links the first part of each line for you.

Here’s an old one of Laine walking. It was filmed on March 27.

Isaac on his bike in the park. This was taken a few days before his third birthday.

He is so fast!

Fun with bubbles (and Gma and Gpa).

Grandma fed Laine sorbet. Laine kept making this terrible face, but then she would ask for more. She did it over and over again and we couldn’t stop laughing!

Laine on the move. This was the day before Isaac’s 3rd birthday.

More walking! This was on April 22.

Isaac the mechanic got this toy for his birthday. He has really enjoyed it! There are several other kits available and I think we may have to get him some more.

I started making smoothies last month. The kids have started drinking them. They sort-of share with me. Or not, as the case may be.

Our little walker. She’s on old pro now, as you can see.

An afternoon ramble last week took us into the park.

Playing on the swing one afternoon last week. I wish I could have gotten more of Isaac laughing. He was just hysterical about Laine being on the swing and her moving around. It was fun to witness!

Dinnertime has become more interesting in our house these days. I just love watching these two together.

We play outside almost every day.

Laine finally swings for a few minutes at a time. Isaac would sit in there forever if I didn’t get him out. She’s too busy to sit “still” for long!

Laine bounces up and down anytime she gets excited (or frustrated) and I just love this expression of exuberance!

The Power Wheels is getting a workout these days. Today, Laine rode it into the park next door. Then we chased Isaac around a bit as he pushed one of the big dump trucks. Finally, I carried the dump truck (and Laine) home so Isaac could ride on his “truck.”

Dinner disaster! This was from tonight.

So I realized after posting these that most of them are Laine. Oops!!! I guess I’d better get some of Isaac up here!

Isaac finished school today. That should make it easier to get video, since we’ll be together more during the summer. HOORAY!!!

Ugh! I wrote this March 28 and it never posted…

My baby girl is one! Oh, how the time has flown. She is SUCH a little darling! She is sweet and mischief, all in one. I can’t imagine life without her. She has taken to the idea of “toddler” very strongly and spent quite a bit of time just walking around yesterday afternoon. It was quite a shock to Todd and me!

We spent the weekend in Kerrville to celebrate Laine’s big day with Todd’s parents. They have been at an RV resort there, so we rented one of the on-site cabins close to them. It was a perfect arrangement and we will definitely plan to do it again (though preferably without Todd getting a stomach flu next time). We celebrated on Saturday to maximize the chance to enjoy warm weather before the cold snap blew in for Sunday and Monday. Laine had her first cupcake and enjoyed smooshing all of the icing around! 🙂 Isaac loved Laine’s choo choo train and they have been playing with it together ever since.

We returned home on Tuesday and everyone was happy to sleep in their own beds once again.  Laine opened a few more gifts at home, including a nifty Wheely bug from Aunt Krissy and Uncle Dave, a sweet dress and pants outfit from across the pond, a stuffed lamb with a Sandra Boynton book from the McCrackens, and a “house” from Mom, Dad, and Isaac.

Here is the video update from the past almost-month:
March 1

March 12 – this is their favorite game lately

Learning to walk on March 13

March 2, 2013 ~ Heather Walter ~ Leave a comment
Isaac and I re-discovered the ball thrower. It is MUCH better than me throwing by myself. I am a terrible throw. No dogs were injured in the making of this video…

CRAZY wind storm earlier this week. You can’t see much in the video, but listen to the noise. Nuts-o.

This dump truck toy box was made by Todd’s grandfather for Todd when he was little. The door says “TJ’s Trucking” on it because that was Todd’s nickname as a little boy.

This was our entertainment on several different afternoons this week. Laine was napping, so Isaac and I had some fun in the front yard.

This has also been a repetitive activity this week. I am so glad that Isaac now gets excited about playing with Laine!

This little one is all mischief. I have to keep her out of trouble somehow! (Please don’t report me; I swear on my life that I have never closed the gate while she is inside).

Isaac has a spray bottle for cleaning the windows (and occasionally himself).