We recently rediscovered parks, now that the weather has gotten much cooler.  I realized that I hadn’t posted many photos of Isaac growing up lately, so I’m posting a few pictures from our mommy outing a few weeks ago and then some from this Tuesday.
Isaac has become quite the little dare-devil and has a blast when we go to the park now.  Before summer weather made outings impossible, I tried multiple times to get Isaac to try a sliding board.  He was not much of a fan and would cry, even though I would hold him the whole way down.  We only tried it a few times because I didn’t want to traumatize him.  Apparently I didn’t.  Now, he not only enjoys going down the slides, but climbing back up them, as well.  🙂  Here he is going up a small slide from one section of the playscape to the next:

Before I made him sit on his bottom to come down the slide…  This is a smaller slide; only about 3 feet high. It is designed to go pretty slowly (like the one pictured above), so he’s tempted to just walk up and down it. 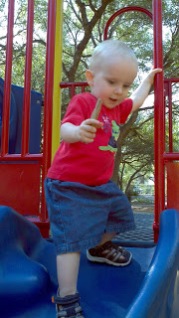 Sliding on his bottom:

Climbing up down the steps on the playscape:

Over the weekend, we went to a new park that my friend, I’ll call her “Mephanie” to protect her innocence, assured us was much safer than the other parks we’ve tried.  As you can see, Mephanie spoke too soon.  Isaac managed to land on a little rock (we think) and gave himself a nice knot on the side of his head.

As you can see, he’s really bothered by it:

He was actually perfectly fine after he cried for about 30 seconds, but several people have now asked me what happened to his head.  It doesn’t help that the night before, I’d managed to cut his chin with my thumb nail while trying to get him to sit down on the couch…  I am not going to win Mother of the Year, after all.  The park was otherwise lots of fun and I’m sure we will try it again soon, although Mommy will keep a better eye out for little rocks…


This week, the cooler temps necessitated much warmer clothing.  Isaac had a great time when we stopped at the park for a little playtime on Tuesday.  He discovered this set of “steps” to climb up to the big slide.  To give you a reference, the top of this thing is about 6′ high – it’s above my head: 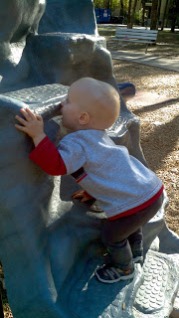 Determining his next move: 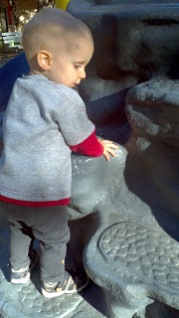 Reached the top and headed down the sliding board!  FEARLESS!!!

Here are a few quick video clips of the boy on the move… They were taken on my phone, so they aren’t quite as good as the ones my camera takes.  I didn’t realize how windy it was, so you may wish to turn the sound “off” on your computer before watching.  Sorry…
Climbing like a little pro:

Going down the slide: