Today, we will attempt to post in order.  Therefore, first up is Snips & Snails.  Here he is after eating a bunch of black beans from Chipotle and then rubbing his hands all through his hair:

Isaac had his 18-month appointment with his new doctor yesterday afternoon.  We met with the nurse practitioner, Linda, for this checkup.  Isaac weighs 21 pounds 5 ounces.  This means he has gained exactly one pound over the last 3 months.  Given the amount of food this boy consumes on a daily basis, I don’t quite understand how that’s possible, but he must be using the energy for something other than growing.  🙂  Perhaps he uses it for running, playing, chasing the dog…  He is now below the 5th percentile for weight and is at the 10th percentile for height.  I hope I haven’t done something wrong to stunt his growth and now he’s going to be a midget. ::sigh::  Now that he is able to tolerate some dairy, I have been giving him more goat’s milk and more yogurt, in the hopes that some additional protein will help him grow some more.  I didn’t mention that Todd and I both think he’s gained some weight just over the last few days (since we’ve been giving him yogurt and more goat’s milk).  She said not to worry that he isn’t speaking or signing much.  She was impressed by how well he responded when I asked him to climb down off the step he was climbing (under the table, which is why I wanted him to get down).  She said he clearly understands what I’m telling him, even if he isn’t saying much.
Here’s a short clip of the busy boy yesterday:

On the house (Hammer & Nails), lots of work got done yesterday.  It was pretty darn exciting!  The front porch is now sporting a new gable.  It looks so nice.  Kristin thought it would break up the long expanse of the house and it certainly does.  I love it.  Especially with the roof pitch being so slight, it makes it much more obvious that there is a roof all the way up there.  😉  They got the gable mostly framed yesterday and then started putting the plywood up.  We think today might actually be the last day that this crew is on-site.  I will miss them when they are gone – they have been really nice and have really buckled down since the debacle last Thursday.  The “new” foreman that Bob brought in appears to be a permanent addition and he’s really good.  He keeps the team focused and on-task.  He’s also a working supervisor, so he’s busy getting things done at the same time.

New doors to give us access to the upstairs porch to be hung sometime this week:

The back of the house is coming along, as well.  They got a LOT of siding put up yesterday!  It is really impressive to watch these guys when they are going.  John stopped by to check it out and make sure things were being done properly.  The foreman for the siding, Nicolas, told him that they’d finish putting siding up on the bottom half of the back yesterday.  John told him he’d buy him lunch if he actually succeeded.  They didn’t earn a free lunch, but they came awfully close.  I was impressed with what they got done.


Putting siding on the back of the laundry room/garage. 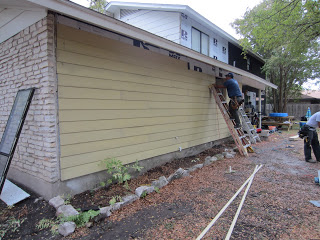 Under the kitchen window at the end of the day: 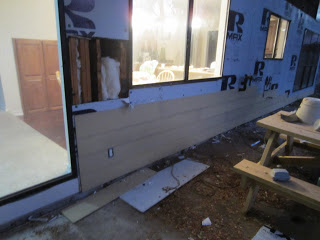 The door Todd rehung for *several* hours on Sunday evening.  This leads to the laundry room.  He finished not a day too soon, since they hung all of the siding and framed around it the next afternoon. 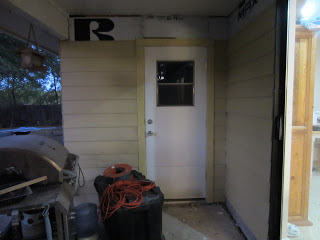 The back of the laundry room/garage.  The foam board is covering the hole in the wall that will soon house a new window: