What a week it has been with our construction!  Monday, a few of the crew came back out and finished putting in rebar along the sides of the future porch.  They still left the middle section open so that the post-tension cables could be tightened.
Monday evening: 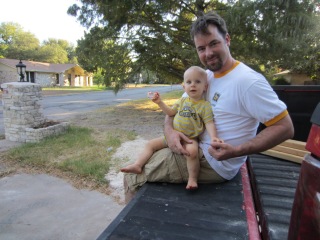 Tuesday morning began with a bang.  The post-tension cable team was here before 8:00 and tightened the cables.
Cleaning up the concrete around the cables: 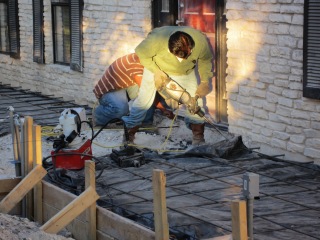 Machine to tension the cables:

Ends of the freshly “tense” cables: 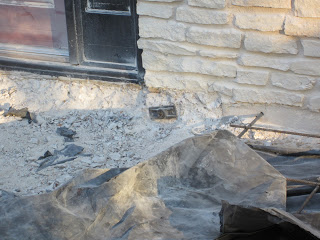 Once they finished, the rest of the rebar was placed.  The concrete mixer arrived at 8:45.  What a sight!  I got home just in time to witness all of that fun stuff.  I am sure half of the neighborhood also walked by to see what was going on.  LOL 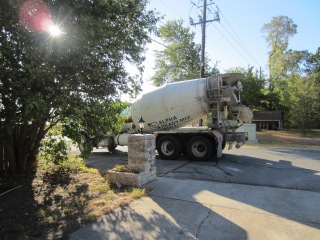 Determining how long the chute needed to be… 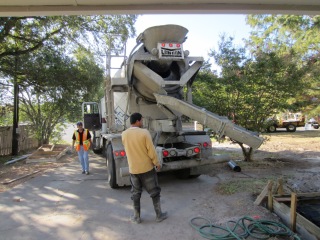 Spraying water to the outside of the equipment so it would be easier to clean off after the pour:

The first concrete pour:
Spreading the first pour.  The guy in this picture was here nearly every day and he really worked his tail off… 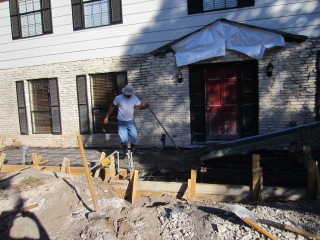 Concrete coming down the chute!

Pouring the concrete was actually a much quicker process than I expected.  They got the concrete spread out and then let it sit for a little while to cure.  These 2 guys were talking and joking, even though they were working really hard.  It was nice to hear that they weren’t just grumbling about how hard things were (like I would have been doing if I’d been the one spreading concrete). 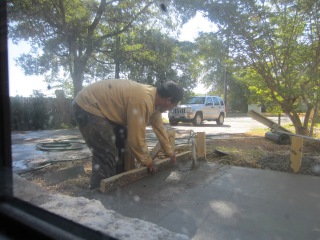 And smoothing the edges: 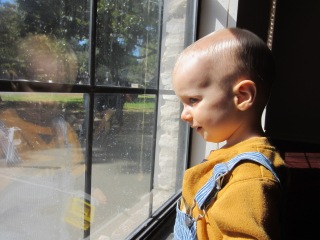 Finally, they used a thing that reminded me of the fan on the back of a swamp boat to smooth the surface.  That was Isaac’s favorite part…

They finished off the edges and again gave the concrete a little more time to harden.  They were able to remove the wood surrounding the new concrete by afternoon and then filled in most of the area around it with previously displaced dirt.

The “finished” concrete portion of the porch.  They filled in the surrounding area with more dirt, but I was more excited to see the actual concrete.  🙂 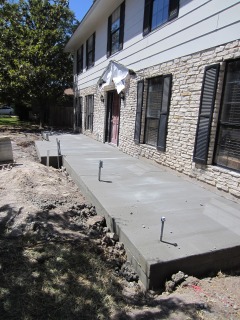 The finished product at the end of the day yesterday:

John, our contractor stopped by yesterday afternoon to check out the progress.  He said they will allow the concrete to cure the rest of this week before starting on the framing next week.  Stay tuned!