This week began markedly less exciting than last week. Someone delivered part of the lumber Wednesday.  Also on Wednesday, the framing crew came by and tore the bottom 2 rows of siding off the front of the house to allow Todd to run some electrical. Believe it or not, our house is now even MORE ghetto fabulous than before!  🙂  I know; you’re jealous…

Todd got home and immediately set to work, closely supervised from inside the house.

He worked after dark:

To make our home more Swiss-cheese-like. 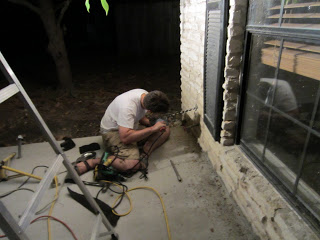 Thursday began with a little more interest, however.  The framing crew arrived first thing in the morning to begin building the porch for the second floor.  They will be tying into the board supporting the front of the (existing) house.  Todd asked how they were going to seal the house back up once they’ve done that and was greeted with a blank stare.  Not terribly comforting…  Todd and the framing leader, Bob, figured out how they can use flashing to ensure we won’t have to worry about weather.  They were also planning, somehow, not to tie in on the roof for the second story of the porch. Todd supposes they were going to just drop down from the original roof to the edge of the front porch – 7 feet away.  I am not sure how much of a view we’d have if they’d done that.  🙂  I think we’d have to stand against the back wall in order to be upright on the second floor of the porch.  Not exactly what we (or our architect) envisioned.  Thankfully, Todd was home in the morning working on some more electrical stuff and was able to walk Bob through what our finished product should ACTUALLY look like.  I think we are on the right path now.


The posts were delivered Thursday.  Then we got even more lumber…

End of day on Thursday, we had most of the posts up…

View from the front:

Jackson closely inspected the remaining lumber to be sure it was up to snuff. 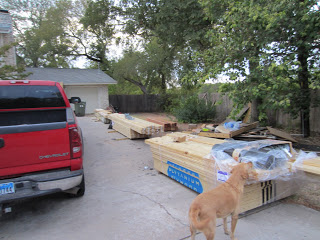 John, the contractor, and I need to chat because I have asked for a written schedule and I think he’s hoping to just “talk it over” with me.  I am not sure he’s remembering all of the little details and want to be sure he plans for them – things like the fact that we have a totally new window going into the laundry room and someone will need to frame that in.  I am glad that things are progressing and we seem to really move when a new team arrives and has their marching orders.  The challenge is that I don’t think new crews get scheduled until a new week begins, so, for example, no one was here to do anything this week until Thursday.  The project has been sitting for 3 days, which isn’t a terribly long time, but I’d still like to know when there are going to be idle days so that I can make plans accordingly (or warn the neighbors when it’s going to be particularly loud).


The framing crew arrived again today and is currently working.  They are making progress and Todd and I are getting excited.  Isaac is watching from various different windows throughout the house to be sure he doesn’t miss anything.


In other news, I am such a Proud Mommy!  Isaac has been in swim lessons for a few months now and seems to really enjoy them.  He had been learning lots of new skills, including how to blow bubbles.  He hasn’t been consistently blowing them in class, but loves to put his face in his bath water to demonstrate how it’s done.  Yesterday, he blew bubbles on cue in class!  This means he gets a ribbon: 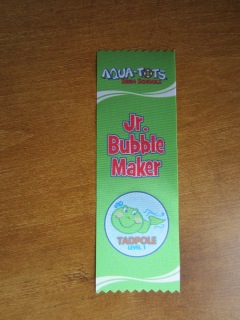