Isaac is 11 months old today!  This month has been LOTS of fun.  He’s learned some new things, like pointing and clapping.  We are also working to get his sleep “schedule” back on track as it’s been off for about a week now.  Last night, he also said his first word!!!  It was “Yay!”  Naturally, right?  He’s my kid…  He has said “mama” and “dada” and something similar to “hi”, but this was the first thing he said remotely close to being in context. 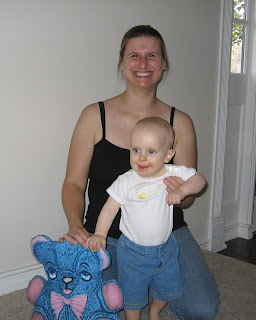 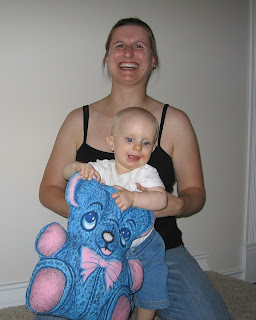 In the past month, he’s gotten a little longer and stronger, but, unfortunately, has lost 2 ounces.  He is back down to 17 pounds, 12 1/2 ounces.  I took him to the doctor’s office and weighed him today.  I am glad that I did so that I can try to make some changes before his next check-up in a month.  I was worried that I was force-feeding him because he was taking 4 ounces of food (one container) at every meal.  Now I realize I may actually be underfeeding him.  <>  I am still nursing quite often and even gave him 4 meals today.  I am adding some olive oil to his food (the veggies, anyway) to try to increase his caloric intake.  I don’t want to force him to eat if he doesn’t want something, so we’re going to have to get creative on getting him to eat enough.  It almost doesn’t seem like there is enough time in the day!


Candy and Henry came over to play in the pool today.  It was a warm 80 degrees outside, so the mommies ate some barbecue while the boys splashed. 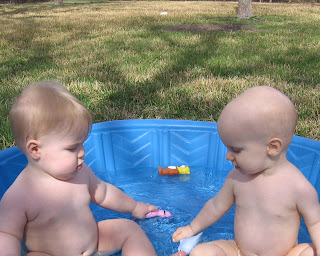 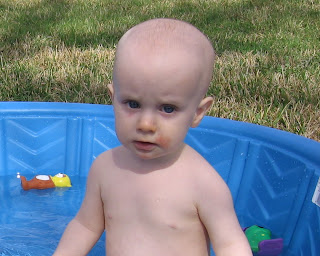 Here’s a quick video of Isaac demonstrating his ability to clap (and charm his parents).  It was *immediately* after I turned off the camera that he said, “Yay!”  Todd and I were so excited!

This second video was recorded this morning.  I had already finished feeding Isaac his oatmeal and was eating my cereal.  I had some blueberries that I was adding to my bowl and decided to let Isaac try them, too.  I was thrilled that he actually tasted them!  He’s not been a big fan of self-feeding over the last 2 weeks or so.  We did give him a bite of tortilla the other night, though, and he managed to turn it into a gooey mess before finally swallowing it…