I am sure I’ve mentioned this before, but I’ll say it again.  Wednesday is my favorite day.  Last week, we met for our moms/babies group at my friend Marielk’s house.  It was a lot of fun to see the older boys (Isaac and Henry) playing with Jackson.  Jackson’s about 6 weeks younger than Isaac, but he’s learning a lot of the same skills that Henry and Isaac are mastering.  Pretty nifty!
They are all learning to roll to get somewhere.  Henry’s pretty much an ace on this:

Jackson’s not far behind, though: 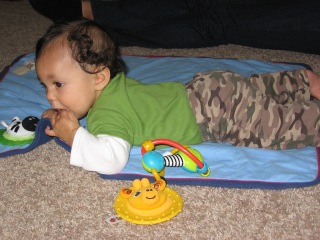 It’s also good because the boys generally get in a little nap at some point during our meetings, but the mommies are still able to hang out and talk.

Unfortunately, a couple of our members have recently returned to work.  One of these members is Marielk, who hosted last week with her sweet little Christopher.  This week, we were back to Stephanie’s house, which is always a fun place to gather (since I take over the biggest, comfiest chair)!  Isaac was “bullying” Henry for the toy Henry was using by trying to beat him up with another toy.  It sounds like all of the boys are teething now, too, which makes for some interesting playtime.

They did eventually get better… Or maybe we just decided to separate them after a few little encounters.

Cash showed off some of his new dance moves:

And Henry crashed for a really long nap.

All of the “original” group of boys are able to sit up now.  The other girls were able to get a few shots of Isaac, Henry, and Cash all sitting together, but I wasn’t quite as quick with the shutter as they were.  Here’s a quick glimpse of Isaac and his pal, Henry, though.