Let’s just say that today did not go at all as planned.  We *thought* we were going to spend the morning at home and then head over to dinner at the Stolpes’ house around 2:00.  However, Isaac woke up with a fever this morning (I knew he slept too well last night!).  His temperature hovered at around 101 degrees all day.  Poor little guy.  He wanted someone to hold him at all times and wanted to sleep most of the day.  It worked out alright for us.  We had most of the fixin’s in the pantry, so Todd went out to get turkey to complete the meal.  We had turkey, dressing, green bean casserole, cranberry sauce, and gravy.  It was a darn good dinner; if I do say so myself.  The green bean casserole was the trickiest part.  It had to be dairy-free.  So I used Golden Mushroom soup instead of the standard Cream of Mushroom.  That should have been the biggest change to the recipe.  It wasn’t.  After I’d started to put the food together, I realized that I didn’t have any more plain rice milk – only chocolate and vanilla.  I had used the last 2 cups of plain milk to make (also dairy-free) potato soup last night!  Oh no!!!  The solution?  Mix some of the potato soup in with the Golden Mushroom in order to thicken up the sauce for the casserole.  It wasn’t all bad, actually.  I’m not saying it would be my first choice, but… 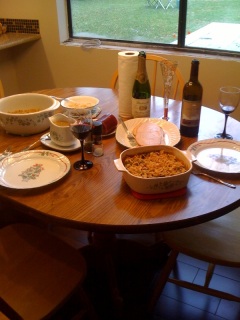 We also had a bit of a surreal experience this morning.  I was afraid of going stir crazy because Isaac wanted to be constantly held, he was tired, and I wasn’t sure how fussy he was going to be as the day wore on.  I suggested we go for a walk as a chance to get out of the house a bit.  Isaac is generally calmer outside and I thought he’d be less restless on a walk.  As we left the house, it was 76.8 degrees.  I had on a tank top and jeans and even suggested to Todd that he trade his jeans for a pair of shorts before we left.  There were some dark clouds overhead, but we figured we’d walk the 1.5 miles quickly enough that it wouldn’t be a problem.  For those of you familiar with our neighborhood, we walked out across the bridge behind the house and through the wooded area into the next section of our neighborhood.  We’d only gone about a block after the woods ended (less than 1/2 mile from the house), when the wind started to pick up.  As we walked into the headwind, there was a sudden cold burst of air.  It lasted maybe 3 seconds or so.  It was odd – like that feeling when you’re swimming in a lake and hit a sudden cold spot.  Then it was gone just as quickly.  Roughly 20 seconds later, another cold wave of air washed over us.  This one just kept going and it was really cold!  The wind never warmed up again.  We actually only took a few more steps before deciding to turn around and go home the way we’d come.  We were gone less than 20 minutes.  I checked the temps when we returned home.  It was 63.2 degrees!  WOW!!!  It isn’t every day that you get to feel the temperature drop almost 15 degrees in as many minutes!  It’s now in the 40’s outside and is supposed to get into the 30’s tonight.  We have freeze warnings in effect for tomorrow evening.  It finally feels more like Thanksgiving weather, though, and Todd lit a wonderful fire in the fireplace for us this evening.


I hope Isaac enjoyed his first Thanksgiving with us.  Todd and I certainly did.  Even if it wasn’t what we had planned, it was one of the best ones I think I’ve had!  It was a reminder to be thankful for our family and the chance to spend the day together.  Todd took a break from his many projects and we got some good, quality family time today.


Now, for the part you really wanted, a video of Isaac.  It’s a couple of days old, but he really didn’t do anything you’d want to see on video today.