When we went to Rudy’s for breakfast, this amazing car was parked in the parking lot.

Todd and I looked it over and saw that it was signed in several places by different people.  Suffice it to say that I’m unlikely to ever own a car that people want to sign…


As we ate breakfast, Todd and I speculated on the owner.  Todd guessed it would be a man in his 50’s.  I decided he would be divorced with no children.


On our way out of Rudy’s, I stopped to take this picture.  The owner of the car, who was exactly the person Todd and I expected him to be, saw me and told me it would cost $1.00.  I laughed and told him it was a nice looking ride.  He told me I needed to sit in it.  !!!  I didn’t need much convincing!  He asked if I had anything sharp in my pockets.  Apparently the seats are $7,000/each.  That’s more than the value of my entire car.  LOL 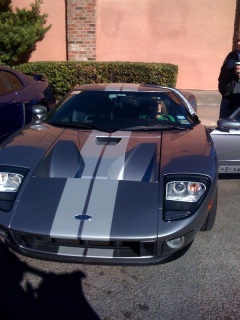 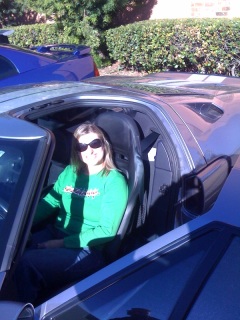 It was definitely an experience!  The car sits really low, which made it interesting to get in and out.  The doors actually open half of the roof at a time, but it makes it easier to get a picture taken.  LOL  The guy said he’d just driven down to San Antonio and written a check for the car when he bought it 5 years ago.  They were originally listed at $300K, but he waited until the prices became “more reasonable.”  It still cost more than our house…  It was fun to sit in the car and I will remember it for a long time to come!