There’s not much to report from Austin today since I managed to get 3 posts up last night.  Isaac is currently sleeping, although I forgot to give him his Tylenol, so we’ll see how long it lasts…  We went to Crawlers/Toddlers yoga this morning and he crashed for a really good nap in the car on the way home.  I just had to take every back-road available to make sure he was in the car long enough and didn’t wake up the second I walked him into the house.  When he woke up, I gave him some milk before feeding him some squash.  I guess I’d fed him too much before this because he doesn’t normally make as big a mess as he did today.  He had fun with his squash.  I got some cute pictures that I just have to share. 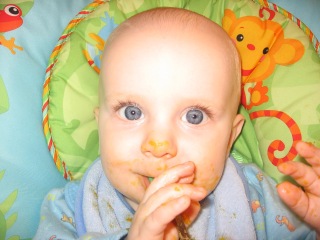 I did take the spoon away when I got concerned that he was going to either choke or impale himself on it.  :o)


After the squash explosion, of course, I had to give Isaac a bath.  This was an interesting experience because we took out the little piece he used to be able to “sit” on in his little tub.  I seriously thought he was going to drown himself.  With me there.  Holding on to him with both hands.  He scared me half to death, although he didn’t seem to notice.  He is able to sit up well enough in the tub – unless I’m rubbing soap on him.  That makes him a bit wobbly and then he just tries to put his face in the water.  As you might imagine, I’m not such a fan of that.


Isaac is pushing up ever farther on his arms.  Today, he managed to push himself backwards some with his arms, so he’s starting to realize he can use them for mobility. 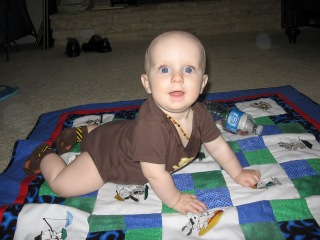 Here’s a quick video.  He was quite the energetic little fellow this afternoon.  (Mom, for the record, Nestle walked by just after I turned off the camera, so Isaac started gunning for him, instead).