As you are probably aware, this week I said good-bye to the cat I got in college. Nestle was with me for 12 years. I realized tonight that he was with me for 1/3 of my life. That’s a pretty long time and it’s going to take some time to adjust to life without him. He’s been avoiding us most of the time for at least the last year or so – pretty much since Isaac has been able to chase him. He had stopped eating most of his food. It took a while for us to notice this because Jackson would go in after Nestle stopped eating and take the leftovers. When I took him to the vet on Monday, Nestle had lost over 5 pounds (more than 25% of his body weight).


Last Friday night, Nestle was limping. Severely. We decided to wait until morning to see if he was better. Saturday morning, he was still limping but less, so we thought maybe he’d just pulled something and it would take a few days to heal. Sunday night, however, he was barely walking. I called the vet on Monday and dropped him off. They had to sedate him to do x-rays. They didn’t see anything major on the x-ray, but noted the decreased weight and ran some blood tests. I brought Nestle home with some paid meds and we tried to make the hall bathroom comfortable for him. We figured he’d be close to his food, water, and litter, and not too close to Isaac or Jackson. I had thought the pain medication would help, but it didn’t seem to. He was lethargic and wouldn’t move much. I took him back to the vet on Thursday because he was eating less than half his food and they wanted to do a sonogram to see if anything else was going on. The vet diagnosed him with “hepatic lipidosis.” In layman’s terms, he was a fat cat who stopped eating. His body started metabolizing the fat and was overwhelming his liver. They gave me some pills to help the liver function, 2 new types of food to try, B12 vitamins, an appetite stimulant, more pain meds, and something for joint support (they found arthritis when they reviewed the x-rays again). I brought him home on Thursday evening and we opened up his carrier, but set it in the bathroom so he could get out at his leisure. We took the lid off of it to medicate him that night.


Friday morning, Nestle hadn’t gotten out of his carrier. He’d gone to the bathroom and couldn’t seem to get up. He hadn’t eaten his dinner, even though it was dry food (his favorite). I checked in on him throughout the day, but he was obviously not improving. At about 3:00, I looked in on him and he just looked sad. And hurt. And I knew it was time. I called my friend Amalia. She came to the vet with the kids and me. She kept Isaac entertained in the waiting room and outside while I visited with the vet.


The vet gave Nestle a tranquilizer. I petted on him while he fell asleep. Then she gave him the medicine that stopped his heart. He passed away very peacefully. I know he isn’t suffering any more.


As much as he drove me nuts, I really miss him. I hope that he’s across the Rainbow Bridge eating lots of delicious carbs and resting in soft, enclosed, warm, sunny spots. 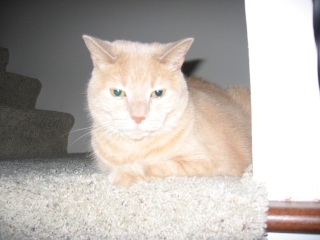 One thought on “Missing Nestle”