Isaac is getting better and better at walking.  He is now just as fast with his walker as he is crawling.  It’s a matter of time before he’s running full-throttle!  I am patient, though, and I am willing to wait as long as it takes.  I can hardly keep up with him when he’s crawling as it is…  Unfortunately, none of my videos have yet captured the running commentary we now have going.  Isaac babbles a LOT and usually talks as he makes his circuit around the house.

Grandad came to visit Isaac (and Todd and me) last weekend.  He got to witness Isaac in action first-hand and even helped him practice.

Isaac rarely sits still now, unless we are in an unfamiliar location.  Or he’s eating.  He’s also getting better with all sorts of sippy cups. 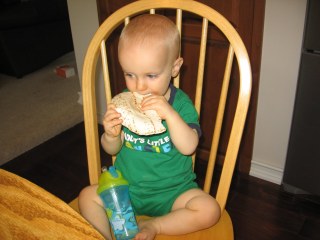 He still loves to play in his sand box.  Jackson is still an ever-present helper.  I can’t wait for them to be able to play together!

Another little video of Isaac.  He has 2 walkers and apparently thinks he might be able to move twice as fast if he uses both at once.  🙂

One thought on “Walking Practice”