After much ado about not being able to pull photos off my camera…  I had a full memory card, so I didn’t even take many videos between posts.  I am proud, however, to present a post that has nothing to do with problems in our house!  LOL


Here’s the 10-month photo (a couple weeks late).  You’ll note that Isaac is standing rather than laying down for this picture.  Think of it as representative of how life is going these days!  Ha ha! 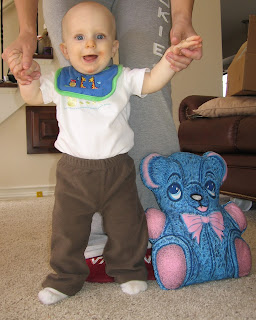 Isaac’s Nana (my mom) has been here since last Sunday.  She left this morning and we were sorry to see her go.  We had a *fantastic* visit and are already hoping for her next one.  Mom got to witness first-hand the difference a couple of weeks makes in Isaac’s development. 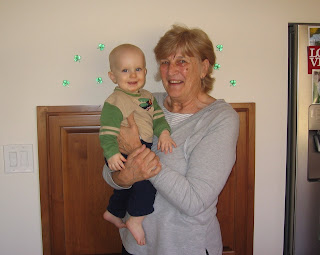 Isaac is crawling everywhere now.  It’s so fun to see him exploring his world.  Monday, his friend Isaiah came over to spend the day.  Isaiah’s a bit taller than Isaac, so things had to be moved up just a little higher than they were.  It made for an interesting day!  Both boys crawl all over the place, then get to a piece of furniture and use it to pull up to a stand.  Isaac is getting faster daily and seems to be pulling up every time I turn around.  The good news is that he can now also get down from a stand, which was much harder to master safely.  Since it’s a matter of time before he’s walking, we have also gotten Isaac some new shoes.  I think they’re adorable, but you can decide for yourself. 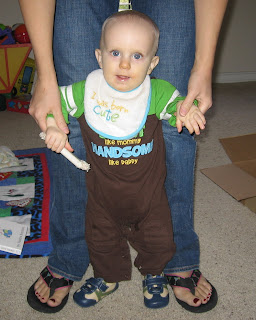 As of this writing, Isaac has 4 teeth.  He’s got 2 more coming in and I expect to see them within the next couple of weeks (if not days).  Poor little fellow!  The top 2 came in simultaneously and now he’s cutting the 3rd – hopefully this weekend so he can finally get some sleep (and so can we).  Here’s a messy shot of Isaac’s enjoyment of a teething biscuit a couple of weeks ago. 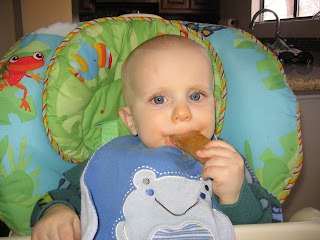 Isaac learned to clap this week.  His friends were here on Wednesday and he saw Henry, Anderson, and Cash clapping.  Apparently this was enough to convince him to give it a try.  He is *adorable* when he claps because he gets a huge smile on his face like he’s proud of himself.  Today, he also began pointing.  I try to tell him what items are in front of him when he points, but it’s usually “Mom.”  :o)  I’ll try to get video of Isaac clapping this weekend.  It’s not something he’ll do when prompted, so it’s tricky to catch on camera.  Meanwhile, here’s a little bit of him crawling and playing (though not as fast as he was moving today!)