Isaac has been super-snotty for about a week now.  The poor little thing wants only to sleep in someone’s arms and semi-upright so he can breathe.  Today, he fell asleep in his swing while I was in the shower, so I left him in the steamy bathroom.  I have the door open so I’ll hear him when he awakes.  Hey, don’t judge.  I’ve been holding him for most of the last 4 days.


He’s getting closer to crawling when he will let me put him down to play.  I have started crawling on the floor like a lunatic, which Isaac finds amusing.


This is the monthly picture with Blue Bear.  I took it a few days ago, but this is the first time I’ve had a chance to blog since then.  The bear is starting to look smaller!  I am sorry the picture is sideways.  I have no idea what’s going on with it – it’s the second time I’ve uploaded it because it was too large to fit on the screen the last time.  I’ve never had this problem before… 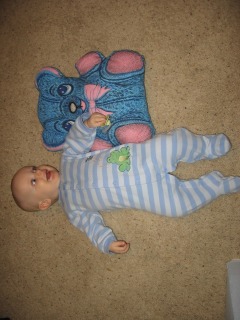 In other news, Todd finished all of the trimwork downstairs.  We are counting the stairs themselves as a separate entity.  :o)  He’ll finish those in a few days while he’s off at Christmas.  My dad is visiting us this weekend, so I am not sure whether Todd will have a chance to work on the trim then.