Todd has continued to work on our hardwood floors this weekend.  This has been no minor feat!  He bought a flooring nailer several weeks ago to be able to “staple” the floors down.  I don’t know a whole lot about it other than it is connected to the air compressor and apparently makes life much easier when it’s working properly.  Yesterday, it jammed and stopped working.  It had started to jam after every hit, but finally it quit altogether.  Todd took it back to Harbor Freight, who allowed him to turn it in and replace it with a new one.  He brought the replacement nailer home and, lo and behold, it broke.  I don’t think he even used it for a full 30 minutes before it jammed.  In the process of trying to unstick the very thorough jam, something broke, so Todd took it back to Harbor Freight, as well.  They were closed.

Today has been much more successful.  Todd got yet another nailer from Harbor Freight this morning.  He’s finished most of the kitchen floors now.  They look so terrific!  He also finished most of the entry, half-bath, and closet downstairs.  The only things left to do have to be glued down, so he is officially finished with the staples.


This is the view of our entry: 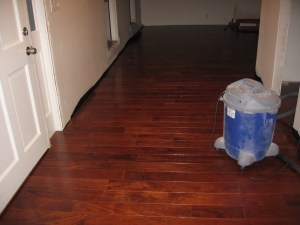 This is the kitchen floor:

Dave and Kristin have the same floors in their kitchen, so it’s neat to know that we have that little connection.


We just learned that we were incredibly fortunate with all of the crazy wind and rain from Tropical Storm Hermine.  At least one life in Austin was lost and there was a great deal of property damage to many homes in the area due to flooding.  As it turns out, we are remarkably blessed. The next door neighbors had flooding in one of the rooms in their house.  Across the street, our neighbor, Joe, had so much water pressing against his garage doors that he opened the doors and just allowed the water to flow in one side and out the other through the garage.  The neighbors across the next street from Joe (about 2 houses down from us) had 5 rooms damaged to the point of pulling out all of the carpets, knocking out the bottom 4 feet of drywall and replacing all of the insulation for mold remediation.  Their names are also Dave and Judy, like Todd’s parents.  Across the back of our house, you can see where there is a debris line from the water gushing across our back porch.  It is a miracle that we didn’t have any flooding in our home!!!  This would have been awful given that Todd is still in the process of laying floors  – it would suck to be halfway through and have them ruined.