In today’s fun science news, acid tastes sour. The kids and I did a taste test on different foods. Then, we boiled water and, in a separate pot, shredded cabbage. Mom warned me that boiling cabbage might leave an odor behind, so I set everything up on the picnic table after the water came to a boil. I poured the boiling hot water over cabbage leaves and we let that combo cool for 30 minutes. Then I poured the strained cabbage water (which was now purple) into separate jars. Here’s our initial set-up: 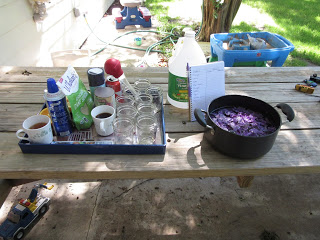 After we’d completed our taste tests and decided which ones we thought were sour, we added bits of each food to our cabbage water to see whether it changed colors. 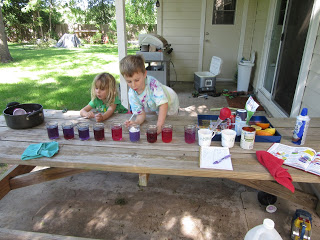 The most dramatic color changes were from lemon juice and vinegar, which meant they were the strongest acids. The least changes were made from tea and whipped cream. It was a fun excuse to get everyone outside on a sunny, breezy, cool day. 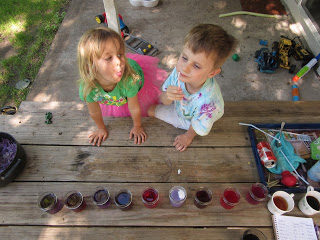