I pushed for about 2 hours. Todd was an amazing coach.  He counted for me because he knows how much I like to have something concrete and I prefer numbers.  (TW:  For other future coaches my conclusion was that it didn’t really matter what I was saying as long as there is something to focus on other than the current pain.  It’s kind of like bar small talk.  On the plus side counting is far easier than most small talk and apparently worked OK.)  It was also great to hear the excitement in his voice when he could start to see Laine’s head crowning or when a push was particularly effective.  (TW:  That was awesome).  It helped me to focus when I thought we were never going to get there.

I remember looking at the clock sometime around 12:45 and thinking that if I could have her in the next 5 minutes, she’d be born at the same time as Isaac.  That time came and went.  I did a lot of yelling at Andrea, who blessedly did NOT yell back at me.  I admit I was a bit of a weenie.  I got so tired that I was SURE I wasn’t going to be able to get this baby out.  Thankfully, someone suggested I have some cranberry juice to get a little sugar energy to push us to the finish line.  (TW:  Again, she was a rock star, pay no attention to her comment on being a weenie, she did this all with no drugs.  I wanted drugs just watching!)  I told Andrea to just “Get her OUT!!!” about 200 times.  At one point, Andrea said that if I really wanted her to, she could do that, but that wasn’t the birth story that Laine wanted to have.  I am incredibly glad that she knew what my heart really wanted and didn’t listen to the things I *thought* I wanted when the going got tough.  Toward the end, literally the very end, she said, “Heather, you can meet your little girl in 3 more pushes.  Can you give me 3 more good pushes?”  I told her I couldn’t.  She told me she was going to ask Todd, Liane, and Shelley and see what they thought.  I wanted to kill her.  🙂  Liane reminded me of a mutual friend’s phrase that “We can do hard things.”  I briefly considered killing her, too.  (TW:  Thank goodness we had all these other people in the room.  Not only did we really have a great birth team but somehow I was never the focus of Heather’s anger.)  Then the next rush came and I began pushing.  After that one, I thought, I only have to do that 2 more times!  I pushed through the next contraction and Andrea told me to look at her.  I didn’t think I could open my eyes.  I did.  WOW!!!  I looked down and Andrea was holding my daughter’s head.  As she turned her head, the rest of her little body slid right out and Andrea laid her on my chest!  It was so incredible!!!  (TW:  It was also fairly scary.  Again, thank goodness we had such an awesome birth team.  Laine was grey and limp and didn’t look good.  Only the positive happy faces around me convinced me that everything was OK.  It was awesome and scary at the same time).

I am outrageously proud of myself that I never once even considered asking for drugs.  (TW: Ditto on being proud of her).  It never even occurred to me.  I am disappointed that I was so mean to Andrea.  (TW: She wasn’t mean at all.  She didn’t even call her names or curse her family. If ever there was a time to be mean and be forgiven that was it and Heather did not take the opportunity.)  I will be eternally grateful that she didn’t “listen” to me when I was yelling at her.

We waited a few moments for the cord to stop pulsing and then they clamped it so Todd could cut it.  I believe the placenta was delivered a minute or two after that.  It was a tremendous relief once that was out!  Todd and one of the nurses took Laine over to clean her up a little and to measure her.  Andrea sewed up some tearing I had done during all of the pushing.

Andrea, Laine, and me (funny to think I wanted to kill my sweet doctor a mere 30 minutes before this photo was taken!  I am a little amazed that she was willing to smile for me and didn’t strangle me given the opportunity.)

Laine getting her first snack.  I look like hell, but I was really glad to meet my little one.

The next day, Todd’s parents brought Isaac to the hospital.  This is him meeting his baby sister for the first time: 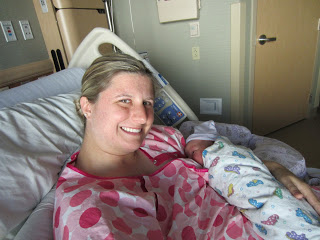 We were released from the hospital 36 hours after Laine was born.  Getting ready to go home:

ADORABLE bonnet made by Grandma and a VT blankie from Aunt Krissy: 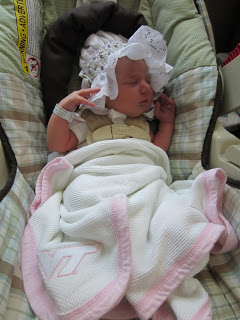 Isaac greeted us as soon as we arrived.

He likes the toys on the carrier, but still isn’t sure about the little person inside of it:

Snoozing in the back yard: 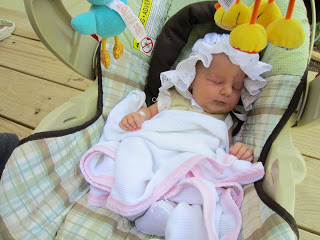 Afternoon nap at home.  So much better than at the hospital!

Todd’s mom has a zillion more photos that from her camera that I will have to post later as I get them.  I wanted to get this out there so there would be pics for those that have been eagerly waiting.