After the swing was hung, we all went to the Tour de Fat.  This is a beer festival hosted by New Belgium Brewing (makers of Fat Tire).  They visit several cities each year and Austin is on the list.  We haven’t been in a couple of years.  The last time Todd and I went, we attended with our friends Kyle and Mo, whose daughter was only about 1 month old at the time.  Thankfully, we were able to meet up with them again this year for Isaac’s first beer festival.  Isaac spent most of his time hanging out in his Ergo and even took a little nap on his daddy. 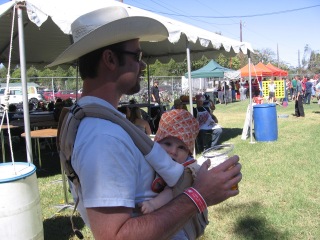 Once the festival fun was over, we headed over to Chuy’s for some grub.

Then we went home and Isaac got to play in his new swing a bit more.  (Don’t worry, Todd didn’t let go of him while he was this high up)! 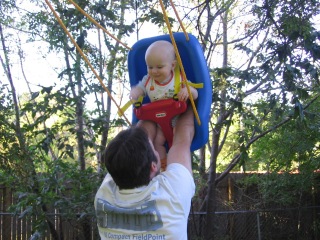 Sunday was the big day, though.  Isaac’s first (and our 9th) Wurst Fest!!!  For those of you not versed in the awesomeness that is Wurst Fest, it’s a 10-day celebration of sausage.  We had a great time!!!

Isaac was a little champ during Wurst Fest.  He napped on both Todd and me throughout the day.  He wasn’t fussy and he didn’t mind the loud music at all.

As evening turned into night, the weather got a bit cooler, so we put Isaac into his Halloween costume.  I added a hat to my own wardrobe, as well.  For warmth, of course…